Webmasters Of The World, Unite And Take Over 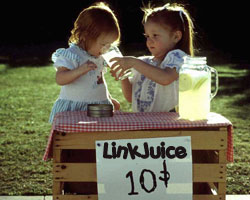 I wish I would’ve had time to finish/publish this post when I started it, but oh well. Better late than never I guess.

Sigh…what a crazy couple of weeks it’s been…yes I’m referring to Google’s scare tactics on paid linking and link networks. To be honest, I’m still trying to make sense of it all. It definitely left me scratching my head about some of the sites that were affected, including a few of my own.

Yes, I buy and sell links (which is advertising people, not search engine manipulation) and am not ashamed to admit it. I have bought and sold links since 2001, well before Google was in charge of internet business ethics as they feel they are today. Here’s some proof from an old page I found and saved:

See that text link ad to my first online business, Surreal Web Design? *Note: I let the domain name surrealwebdesign.com expire 5 years ago, so if you visit just know that I don’t own that site.* I did it then and still do it now for the traffic, not for an increase in some little green bar or to artificially influence rankings. I personally could care less about Pagerank, but the webmasters that buy links from me care a lot so unfortunately I have to pay attention.

Last week I saw most of my sites drop in Pagerank considerably, and for some of them maybe it was justified. Google wants to maintain their stronghold on all available advertising dollars, and good for them. They’re in business to make profits, not pals.

On my other sites that have never bought, sold, begged, or bartered for links at all though, I saw a decrease in Pagerank and it’s left me wondering why. They all have great original content, diverse link profiles, and don’t violate the webmaster guidelines in any way. Why would Google want to bite the hand that feeds them? Why has Google pretended to be a friend of webmasters for so long only to kick us in our collective nuts with stuff like this? Does it have to do with keeping your friends close but your enemies (because we sell direct advertising) even closer?

There have been mixed reactions across the blogosphere about the “updates” (or export as anyone following TBPR knows), so instead of blabbing about how Google is good, bad, or ugly I thought I’d round up a few of my favorite quotes:

“Can you imagine McDonald’s coming out with a terms of service document telling other restaurants the way they’re allowed to use pickles and ketchup? Would anybody listen to them? Why is Google any different?” – One of my favorite “trouble makers” and bloggers, Michael Gray

“What Google has shown with their zealous adjustments on PageRank is that content really is not all that important. What is offered to the world is really not that relevant. What is relevant is playing by Google’s dictates. When they say jump, if you jump, you’ll rank high in PageRank.” – Technosailor

“oh mighty Google overlords, take my ads, take my firstborn, take anything you wish. By the way, give me a minute to bend over and here’s some lube to make it easier on you.”, and “Are you going to email Google to have them come do your work while you do theirs?” – Jennifer Laycock of Search Engine Guide (as a side note, you need to read that post to understand the context of the quotes)

“NONE of the announcements about Google penalizing sites are on official Google sites, such that they can control people through fear and have the media spread misinformation.” – Aaron Wall of SEOBook

“For a company such as Google with a stock price based extensively on anticipated growth and public sentiment, it doesn’t take a huge swing in goodwill to have a dramatic effect on valuation. Google has just slapped their biggest fans.” – Andy Beard

We’ll have to wait and see how it all pans out, but I along with many other webmasters will not change the way I do business just because Google says so.