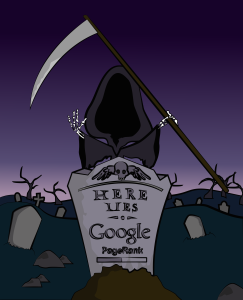 Search Engine Land recently ran an article by Danny Sullivan, RIP Google PageRank Score: A Retrospective on how it ruined the web. In this article, Sullivan essentially rejoices over the fact that Google is going to hide PageRank scores from the public. In other words, you’ll no longer be able to find the PageRank of your own or anyone else’s website by using a toolbar.

This is not news to anyone who keeps up with Google’s policies and announcements. PageRank, in fact, has been a declining factor in SEO for quite a few years. As Sullivan reports, “PageRank as a visible score has been dying a slow death since around 2010…” Firefox support for PR toolbar was dropped in 2011. An article back in 2012 by Dave Davies gives reasons Why PageRank Doesn’t Matter. In this article, Davies makes it clear that Google’s internal ranking system does indeed matter; it’s only the publicly visible green bar that we shouldn’t worry about. He argues that PR was never a reliable way to gauge a site’s value and that it’s better to focus on the more straightforward evidence of actual page rank -that is, where your site ranks in the search engines.

Considering that both Google itself and many SEO experts have been de-emphasizing PR for so long, the announcement that PR will soon be completely hidden to the public is only the last nail in the coffin. This brings up the question of whether this is a good or bad thing. As with most developments related to the world of Google and SEO, it’s possible to identify both pros and cons.

The Case Against PageRank

Sullivan blames PageRank for what he refers to as “crappy emails asking for links.” The idea is that having a definite system of ranking pages between 0 and 10 made people desperate to acquire links in order to raise their PR. It’s true that since 2000, when the Google Toolbar was introduced, the frenzy to acquire backlinks became quite fierce. Even the algorithms such as Panda and Penguin, which penalized low quality links, has certainly not eliminated the obsession over links.

In addition to people offering to sell or exchange links, PR was also a factor in the website marketplace. If you were looking to buy or sell a domain or website on a site such as Flippa, PR has been a major factor in determining the site’s value. Unfortunately, this led to the manipulation of PR, as unscrupulous black hatters found ways to artificially, and often temporarily, raise PR. There is little doubt that PR created a system that could be gamed. This, of course, is true for many types of data displayed online. It’s just as true, for example, of PayPal screenshots of alleged income as it is for PR. Gray and black hatters will always find tricks to distort reality and no system can ever be failsafe.

The Other Side of the Coin

At the same time, PageRank has had some beneficial aspects. There is something to be said for being able to quantify the value of a website, even if the system is far from perfect. We could even argue that, given Google’s unrivaled power to rank websites, that it’s only fair that people be given some easy to understand metric on how sites are performing.

Of course, the obvious way to determine the value of a site is how it’s actually ranking in the search engines. If your site is near the top of page one, you are obviously doing something right. If it’s buried on page 98, you have work to do. Actual rankings, however, can be fickle and vary quite a bit from one week to the next. PageRank, meanwhile, provided a simple metric that was generally more consistent and long term.

PageRank was also a reliable way to gauge the value of sites from which you were trying to get links. As Google became more strict about link building practices, it became increasingly important to exercise caution when acquiring links PR was one of the simplest clues on a site’s overall value. Of course, you could not go by this alone. As mentioned, PR can be gamed, but it could at least tell you whether a site was worth looking into for building partnerships such as link exchanges.

PageRank also has some value for consumers as well as businesses, at least for those savvy enough to have the PR toolbar installed on their browsers. I can recall, for example, considering a purchase from a certain website and noticing that it had a PR of 0. I therefore opted to pay just a little more from a site with a PR of 5. This was a metric that consumers could use to help determine the trustworthiness of a website. This was before the introduction of Google Trust Stores, of course.

How Much Will Things Change?

Regardless of what you think about PageRank, it’s quickly fading away. What will the post PR world look like? In all likelihood, we won’t see any earth-shattering shifts. Since PR has been declining in relevance for more than five years, this announcement is little more than a formality.

It would be naive to suppose that the end of PR is going to mean that the sale or exchange of links will end as well. As long as there are search engine rankings, there will be search engine optimization. And SEO is still very much driven by links. Sullivan admits that “…links will continue to be brokered as long as people know that Google depends o much on them.” All that will change is that new metrics will be used to gauge the value of websites. These include tools such as Citation Flow and Trust Flow from Majestic SEO or Domain Authority, Page Authority, MozRank or MozTrust. As PR has been declining, we have already seen people relying more on these and other metrics.

PageRank, of course, is not really going away at all. Google will continue to use its own hidden criteria for ranking sites. Doing away with public PR is just another step away from transparency. We will all be required to do a little extra research to determine the value of a website rather than being able to use a single number to tell us.