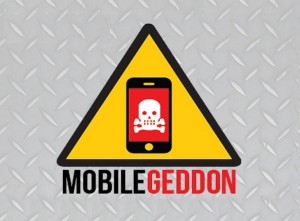 While Google is famous for causing a stir with its updates, it’s been a while since there has been anything as earthshaking as “Mobilegeddon.” The update, which was just released yesterday, is significant because it involves an ongoing shift in the way people access the internet. The rapid growth of mobile devices such as smartphones and tablets has been going on for some time now. It is only now, however, that Google has come out with an update that specifically targets mobile-friendly websites. This will surely have huge implications in the SEO world.

This Update Only Applies to Smartphones

One thing that should be noted about Mobilegeddon is that it only affects smartphones. Even though iPads and other tablets are commonly thought of as mobile devices, Google has decided to specifically focus on mobile websites for this update. The reason for this is fairly clear. Mobile websites present a distinct category and have often been problematic for people trying to access sites that were built for desktops. Tablets are large enough to display “normal” websites, so they are not really part of this issue.

How can website owners know if their site is deemed mobile-friendly by Google? The answer to this is fairly simple, which is refreshing. In the past, it was often complicated to understand exactly what Google wanted. For this update, you only have to place your website URL into Google’s Mobile Friendly Test and you will get a report.

Is Your Business Ready For This Update?

This update is likely to have widespread impact, to websites large and small. According to Greg Sterling, an editor at Search Engine Land, “as many as 40% of top websites are not currently mobile-friendly.”

To put this in perspective, Danny Sullivan, another Search Engine Land editor, estimates that Google’s infamous Panda update only impacted 11% of search engine results. In other words, Mobilegeddon could end up hitting almost four times as many websites as Panda!

There is some disagreement about who will be most affected by the coming update. As the above quotes suggest, some analysts are saying that even the largest websites will be harmed if they aren’t prepared. Some, however, believe that it will be mostly smaller businesses who will feel the pain. Nicole Troster, who represents the Canadian Federation of Independent Businesses points out, “It’s a matter of small businesses not having the resources to invest in mobile friendly sites.”

This may be the case, but with today’s technology it isn’t that difficult or expensive to build a mobile or responsive website. Just as likely is that many small businesses outside of the SEO and technology sector may simply be unaware of Google’s updates and may not notice that something is wrong until their sites start dropping in the rankings.

Some businesses are feeling the pressure and admit that they aren’t prepared. It can be a real dilemma for companies that built their websites long ago and find it challenging to make big changes now. For example, the owner of Beefjerky.com, Gregory Nemitz says, “My site pre-dated Google by several years. I worked many hours to make changes to my website so it would function well on both desktops and mobiles. After wasting a lot of time accomplishing nothing, I determined that the two goals are incompatible.” Many web designers would surely dispute this view. However, it reveals that there are businesses who don’t have the budget or know-how to create a mobile-friendly website.

Some experts are less gloomy about the impact Mobilegeddon will have on small businesses. Nitin Gupta, the senior director of mobile product management at GoDaddy.com, doesn’t believe that the transition to mobile-friendly sites will be very difficult, saying “most of GoDaddy’s customers are prepared for the change.”

Preparedness may indeed be the key factor. This is not, after all, something that Google is announcing out of the blue. An announcement was made at least two months ago about the impending changes. More importantly, this was expected for an even longer time as Google could not be expected to ignore the needs of the millions of people who access the web via smartphones.

Businesses that want to make sure they are ready for Mobilegeddon have two options. They can build a separate, mobile-friendly website or they can make their site responsive, which means that it will be viewable on any type of device. Which alternative is best depends on several factors. For website owners such as Gregory Nemitz, it can be difficult to make an old website responsive. Such businesses might be better off building a new mobile site, although there are costs and difficulties associated with this path as well.

Dynamic serving, which Google refers to in the above quote, is another way to make your site mobile-friendly while maintaining a single URL. This is a type of setup where servers are programmed to respond differently on the same URL, depending on what type of device is being used to access the site. This solution, however, requires a fairly high degree of technical expertise.

What Will Be the Impact of Mobilegeddon?

As with any Google update, it’s difficult to predict exactly what this new update will bring. Businesses that have prepared for this change may actually benefit, as they will have an edge over their less alert competitors. Even those who haven’t adapted, however, needn’t panic just yet. Google may not rank your site as well if it’s not mobile-friendly. However, that doesn’t mean you can’t improve your ranking by making changes later on. You can always ask Google to re-crawl your URLs.

It’s safe to say that the sooner you make your site mobile-friendly, the better. This is, of course, only one ranking factor among many. Mobilegeddon does not mean all of the other criteria Google uses when ranking sites (still over 200+ signals) will suddenly become irrelevant. This update does, however, mean that website owners can no longer afford to overlook their mobile customers.